The Lincoln Leads Seminar Series is a MCR Academic Team project staged during Hilary terms at Lincoln College, Oxford. Each series features 18 to 24 speakers across six to eight seminars, with each panel comprising of a Fellow, an Alumnus/a, and a Graduate student of the College. During each seminar, the speakers respond to a topical question relating to their academic, professional or personal experience, before opening the conversation to the audience for questions and debate. The series showcases the exciting and diverse expertise the College can bring together through its affiliates, and makes it accessible to non-specialist audiences from Oxford and beyond. The series provides a valuable opportunity for graduate members of the MCR to present their ideas and arguments alongside prominent Fellows and Alumni of the College and for attendees to engage in stimulating exchanges. Each seminar is preceded by a wine reception, allowing audience members a further opportunity to engage with speakers and discuss the evening’s topic with fellow attendees. The series has become a popular highlight of the College’s academic calendar and we are much looking forward to the 2022 edition!

Buttermouth Flemyng’: The Stereotypical Association of Strangers with the Seven Cardinal Sins in London and at the English Court, c. 1450-1558

From the fourteenth to the sixteenth centuries, London, its suburbs, and the English court saw the arrival of strangers from the Low Countries, Germany, France, and Italy. As Londoners and courtiers came into more contact with strangers, particularly in the wake of the Hundred Years’ War and the introduction of stranger competition in crafts and trade, anti-alien animosity became more apparent. The city saw some prominent outbreaks of violence directed at strangers throughout this period, including the Peasants’ Revolt in 1381, riots against Italian merchants in 1456-7, the riot at the Steelyard in 1493, Evil May Day in 1517, and Wyatt’s Rebellion in 1554, but grievances were also aired on a day-to-day basis. My thesis project seeks to examine the relationship between these large and small expressions of tension across the socioeconomic hierarchy in London and at the English court, investigating the underlying rhetoric and cultural tropes at work and the extent to which they represented English social values, attitudes, and concepts of identity. As one facet of my thesis, I would like to discuss rhetoric of sin — and, in particular, an association of strangers with the seven cardinal sins — as a common method of demonising strangers and portraying them as a moral and social threat to English society.

The philosophy of tenseless languages: how do we differently conceptualize and experience time?

Time is a universal human experience. All languages conceptualise time, but the expression of time is realised differently; English is known as a language with tense, whereas languages like Mandarin Chinese are considered ‘tenseless’. How does the marking of tense (or the lack thereof) in these languages affect the way we process temporal information? Carried out in the Language and Brain Lab, my research addresses this question by using a psycholinguistic technique called ‘self-paced reading’, a task where participants read sentences word-by-word or phrase-by-phrase, pressing a button to get the next word/phrase displayed. The time taken to read each word/phrase gives an indication of the processing difficulty at each stage, which reveals how linguistic information is computed incrementally and, more specifically, how the composition of temporal meaning unfolds in time. Using this technique, we found a symmetrical pattern in the processing of temporal information between English and Mandarin Chinese, despite their distinct ways of encoding time. These findingssuggest that the concepts of time represented at both linguistic and non-linguistic level cannot always be directly mapped onto one another. Furthermore, my research challenges the traditional view of ‘tenseless’ languages, rendering support for tense as a universal category in human languages 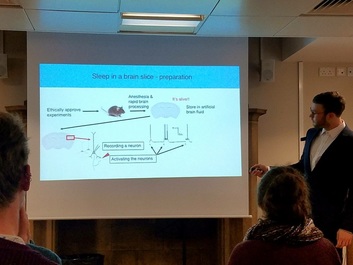 What happens in the brain while we sleep? Novel insights into a hotly debated question in neuroscience

We all spend about a third of our lives asleep, a habit that we share with most - if not all - other animals. While we sleep, we cannot pursue any of our goals and are relatively easy prey for predators. Was Thomas Edison thus right when he said that “​Sleep is a criminal waste of time, inherited from our cave days”? Clinical and animal studies show that clearly no, sleep is crucial for survival and normal brain function. But why? What happens during sleep that is so important? During the last three years, my coworkers and I have worked on one of the currently most hotly debated theories of sleep. The so-called “synaptic homeostasis hypothesis” suggests that sleep exerts its function by acting on the strength of synapses, the connection between different neurons. The theory proposes that when our brain commits our daily experiences to memory, it grows the strength of specific synapses in our brain. Thus, without a counteractive process, synapses would keep growing with every passing day and eventually become inconveniently large. Therefore, according to the hypothesis, sleep shrinks synapses in the brain and thus serves as a counterweight to daytime learning. While intuitively appealing, there are many unresolved issues in this hypothesis, one of which is the lack of a mechanism. How could sleep shrink synapses, and how does the brain choose which synapses to target? In our laboratory, we use live extracts of the mouse brain to work out these questions. Specifically, we record and manipulate the activity of neurons in the cortex. Using these techniques we found a potential mechanism by which sleep could act on synapses. This could add substantial support to one of the key theories about the function of sleep.

I Did Come Here To Make Friends: Sylvia Plath and “The Big Strip-Tease.”

If Sylvia Plath said that every woman loves a fascist, then it must be true that every man loves a martyr. As Shoshanna Felman would argue, we now engage in a culture of over-empathy where the dominant need for an emotional connection warps historical events or figures to better fit a narrative catering to our anxieties. And this, I would claim, is especially true of female artists: consistently represented as tortured, suffering, ethereal, and doomed, this image thwarts any subversive potential they might carry and instead privileges a vision of their trials as part of a motion towards the greater good.

The Islamic State and the dangers of history.

The man said: “We have come to seek that promised by God: your lands and your sons and your blood, if you refuse to embrace Islam.” Rustam said: “And if you are killed before this?” The man replied: “As part of God’s promise, anyone of us killed before this He will send to Paradise and He will fulfil for who is left of us what I have said to you…” (al-Ṭabarī, History of the Prophets and Kings, p.2254)

The explosion of the Islamic State of Iraq and the Levant (ISIL) onto the world stage in 2014 took the world with a surprise strikingly matched by a number of ancient accounts of the appearance of the ‘Arabs of Muḥammad’ on the borders of the Roman Empire in the 7th century A.D. The historical parallels hardly end there. ISIL’s rhetoric seems consciously to imitate the presentation of the ancient Arab Conquests that destroyed Persia, humbled Rome, and that ultimately brought the ancient world to an end. The modern conquerors of Syria and Iraq, like their early medieval forebears, see themselves as the agents of God on earth: their conquest is divinely ordained, their victory certain. Western unease at the apparently intimate relationship between Islam and the sword, or the Kalashnikov, is as understandable as its pedigree is long. The concerns of Christian authors, who wrote in the years when men who had known the Prophet still walked upon the earth, resonate with a sense increasingly expressed today that there is something intrinsically violent to Islam as a faith. The oldest argument offered for the fallacy of Muḥammad’s prophecy is, after all, that there can be no truth in him as prophets do not come armed with a sword. Yet both ISIL and some western critics of Islam have fallen into an historical trap. The Traditional Islamic Narrative, as transmitted through the pen of authors like Abū Ja’far Muḥammad al-Ṭabarī, which has conventionally given both the Islamic world and western orientalists their understanding of the life of Muḥammad and the early Arab Conquests, is woefully flawed. Men like al-Ṭabarī composed their accounts centuries later from a diverse and often contradictory oral tradition to speak to the rapidly Islamicising society of the ‘Abbāsid Empire. History works as narrative, being consciously designed to construct and affirm a new, peculiarly Islamic identity rather than to recapture accurately the events of the 7 th century. When one moves away from the Islamic Tradition to consider the Byzantine and Syriac sources for the Arab Conquests, a far more tentative, disparate, and human process emerges that hints at the likelihood that many warriors in the so-called ‘Islamic’ armies had barely even heard of the Prophet for whose vindication they apparently fought. History will always be a dangerous discipline. It’s most dangerous aspect, especially as currently exemplified by ISIL, is its capacity for one generation to be seduced by the conceits of another.